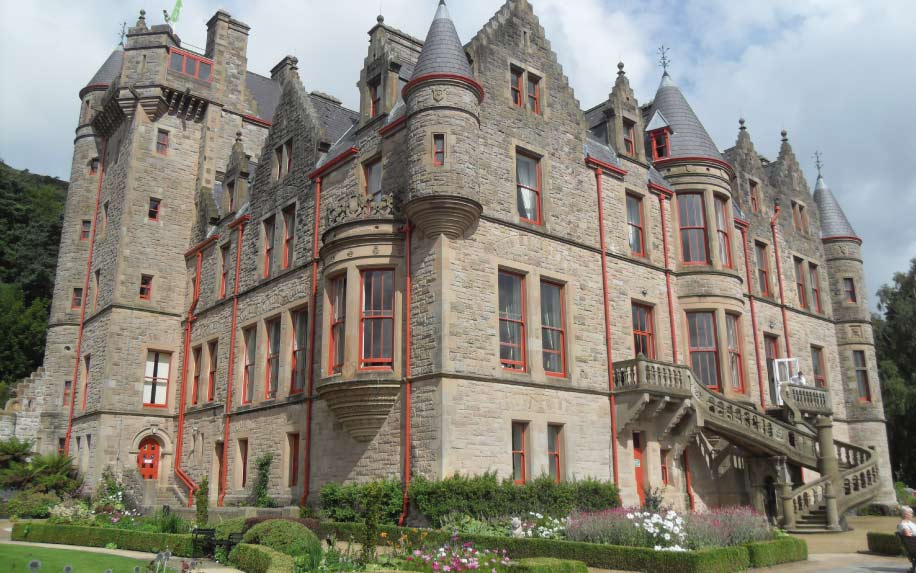 It’s fair to say that we have a rich and varied history in this part of the world. Nowhere is this better reflected than the many castles in Northern Ireland. In fact, there are over 40 castles throughout Northern Ireland, some dating back as far as 2,000 years into the past.

Over the centuries, a wide range of peoples have called Northern Ireland their home. From Gaels and Vikings, to the Normans and Victorians, our many castles are a window into this history.

With that in mind, here are our favourite castles in Northern Ireland.

Located on the slopes of Cave Hill, Belfast Castle offers an unrivalled panoramic across the city and Belfast Lough. There has been a castle on the site since as early as the 12th century, with the sea views offering an important strategic advantage.

The present Belfast Castle was completed in 1870 by the third Marquis of Donegall, at a cost of over £11,000, or close to £1.5 million in today’s money. The castle itself was designed by John Lanyon in the Scottish Baronial style.

For many, the biggest attraction at Belfast Castle is its scenic, manicured gardens. Although it is one of the newest castles in Northern Ireland, it is also one of the best loved, with many thousands of visitors coming to wander its grounds each year.

Visitors with young children will appreciate the on-site outdoor playpark. There’s also a modern cafe and tearoom within the castle itself.

Situated on Northern Ireland’s dramatic Antrim Coast, the ruins of Dunluce Castle appear to emerge directly from the craggy headland beneath them. The earliest record of Dunluce appears in 1513, but parts of the structure date back to the 13th century and perhaps even earlier.

Throughout its early history, Dunluce Castle frequently changed hands between warring clans, throughout centuries of rebellion, intrigue and deception.

More recently, it was the inspiration behind Cair Paravel in C.S. Lewis’ Chronicles of Narnia. The onsite museum outlines why Dunluce is one of the most storied castles in Northern Ireland.

You’ll hear tales of wrecked Spanish galleons, heroic deeds, and even how the Castle’s kitchens fell into the sea during a storm in 1639.

Just outside Killinchy on the shores of Strangford Lough, Sketrick Castle stands on a small island, and is reachable by foot via a short causeway. The original structure was a four-storey fortification, complete with a boat bay and underground passage.

Today, much of the outer structure remains, although the castle was badly damaged during a storm in 1896. As one of the lesser known castles in Northern Ireland, Sketrick is the perfect place to enjoy an important historical site, without encountering crowds.

There is also no fee to visit Sketrick Castle.

Many visitors to Sketrick choose to combine their trip with a stop in the nearby Daft Eddy’s cafe and restaurant, enjoying a selection of traditional favourites, with al fresco dining overlooking Strangford Lough.

Carrickfergus Castle is probably the most famous of all the castles in Northern Ireland, as well as the best preserved.  Carrickfergus town is even older than Belfast, with the Castle having been built in 1177 by the Anglo-Norman invader, John de Courcy.

It’s one of the best preserved Norman castles in the British Isles, with almost 100% of the original structure still standing. The castle itself constantly changed hands over the centuries, being occupied by Normans, Scots, and the English at various points.

The Castle also played host to some surprising events in Northern Ireland’s history, with the last witchcraft trial in Ireland taking place in 1711. Half a century later, the American Navy attempted to capture a British warship from the nearby Carrickfergus harbour, during the American War of Independence.

Today, Carrickfergus Castle is a firm family favourite, with an excellent museum inside, and incredible views over Belfast Lough from the Great Tower.

These days, we can’t talk about castles in Northern Ireland, without touching on Game of Thrones. Over the last decade, HBO’s hit series has seen scores of visitors flock to Northern Ireland to check out their favourite filming locations.

Shane’s Castle is one of the most iconic sites from the series, having been used as the set for iconic scenes, including the Jousting tournament where Gregor Clegane beheaded his opponent’s horse.

The Castle itself was built by the O’Neill clan in 1345. Centuries later, it was extensively renovated and redeveloped by the Regency architect John Nash, before being largely destroyed in a fire in 1816.

Set on extensive open grounds, Shane’s Castle is the ideal location for some family-friendly exploration, or as the perfect backdrop for a quiet picnic.

Another Game of Thrones filming set, Audley’s Castle is a 15th century tower house, on a rocky hill overlooking the Eastern shore of Strangford Lough. Located close to the Castle Ward estate, it is the ideal location for lovers of the great outdoors.

The site offers a number of walking trails, which allow all people of all abilities to enjoy nature as they reach one of the most popular castles in Northern Ireland.

There are also a number of excellent tours around the grounds, with one of the most popular being Clearsky Adventure Centre’s Game of Thrones themed self-guided cycling tour.

In terms of its construction, Audley’s Castle also has a lot to offer to architecture lovers. It’s unique design is based around two turrets, which are linked by a high archway. This is an architectural style which can be found only in County Down.

Guests from around the world choose Northern Ireland for the sheer variety of things to do. Whether that’s marvelling at the region’s natural beauty, or taking in important historical and cultural sites from throughout the ages.

At Coach Road Cottages, we provide different accommodation options, in the Ards and North Down region. Our cottages are the perfect base for exploring everything that Northern Ireland has to offer.

Contact us today to find out more about your next trip to Northern Ireland.